Dad is out of town, traveling for work. L and I swing by a local pizza joint for a to-go pie. We look up and there he is…

The Great and Powerful Oz. No, not the guy behind the curtain. The one who has a television show which, up until yesterday, I’d never seen.

The subtitles are flying by, (phonetically spelled, always a plus for a kid), and suddenly we realize this Great and Powerful Oz is talking about the dangers of eating (too much) red meat, the alarming rate of salmonella in poultry, not over-indulging in calcium…

Animated visuals are showing platelets zipping through the bloodstream like pinballs, an ominous buildup of plaque. Ultimately, we see a heart cease to beat (in cartoon, natch).

L: “What did it say about turkey?”

L: “So milk is bad? Should I stop taking my vitamins?”

I do what any good, responsible parent would: I pull out my iPhone and command him to play.

L has been thrown off the scent.

All I can think is “The Exorcist” might have been less traumatic.

Okay, got that outta the way.

How about bending the truth?

I’m not proud about this, but these things that may occur in the near future:

–L’s Hoodie, (which I wisely purchased in white and is now stained, soiled, disgusting no matter how many times I wash it) may get “lost” on laundry day.

–L’s newest pet, Tofu the Tadpole, may end up going through his metamorphosis “outside.” In a bucket. (He seems so cute now. In a few weeks he’ll be a giant, loud, jumping all over the place bullfrog. Not gonna happen.)

–The ‘Captain Underpants’ Opus may be “donated.” (They’re past tense at this point. Why not share the love?)

Walk the talk takes a pause. 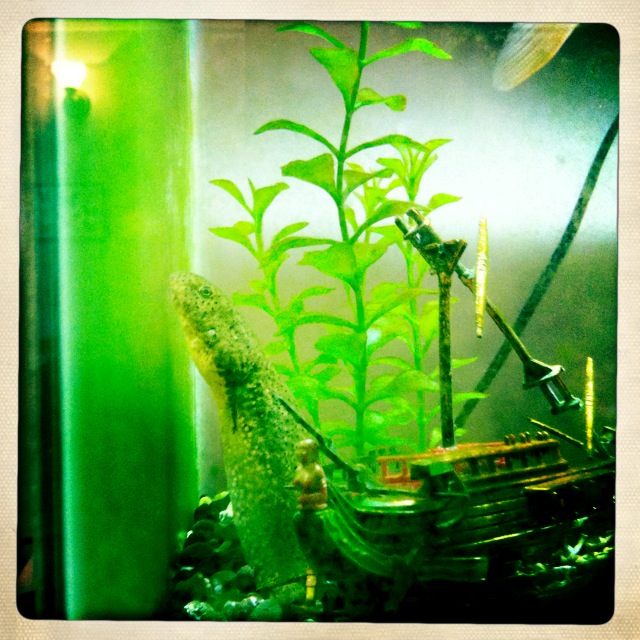 Cute now. Check back in a few weeks.

Some ramblings from last night:

L: “Well, she was crushing pretty hard on me and I really like her, but in the end, I think we’ll be friends.”

L: “So now, I’m thinking about C only I think she likes V and I’m not sure I’ll get anywhere with that.”

M: “I think you and dad are going to have that talk sooner rather than later.”

The devil is in the details. Or the bath.

In the spirit of pantsing, I began tossing chunks of bread L’s way. The gulls followed and swarmed. L is simultaneously laughing and screaming, but mostly laughing.

I grew up in the Midwest. One of my parents was raised in the Deep South; the other grew up all over the place and escaped a fairly dark childhood because he is, well, he’s brilliant. College at 16. PhD at 20. Particle physicist/musician/poet/programmer/humorist. All of that probably came to be because he was so dang smart and because he absolutely, desperately needed to get away.

That said, brains aren’t equivalent to common sense. The first movie we saw in the theater was “Soylent Green.” (Yes, it’s people. For a small child, NOT GOOD.) The first movie I saw on television? “The Birds.” Yes, THOSE birds. Terrifying, squawking, ubiquitous, horrifying, not-melodious birds. To this day, a bird that’s too close is, dagnabbit, just plain scary to me. Lovely songbirds? Charming from a distance. Hummingbirds? Cute, but aren’t they a bit like killer bees?

This weekend, I set out to conquer that fear. What better place than a beach filled with seagulls and a loaf of stale bread? Seagulls are goofy, right? Pixar and Disney depict them that way. Sure, they can be a bit bossy. So can I.

Bread chunks in hand, I began my quest. Gulls are not shy. In fact they’re downright aggressive. (And, yes, of course I should know this, but we must remember the Midwestern roots.) The second they sensed “sucker with bread” they swarmed. I shrieked. They stepped back and squawked at me. With great trepidation, I held out my hand, with giant 72,000 foot long bread scrap (give or take), and they swarmed again.

I stopped my lunacy long enough to take a good look at the leader of the bird pack and what I saw looked downright human.

“Just pipe down and hand me the bread and we’ll all go on with our day.”

Did that. Lost my voice in the process. Gained a little less fear of birds. And a son who laughed so hard, he fell to the ground and said, “my mom is crazy.”

Laughter. As much and as often as possible.

My Kid Wears A Gas Mask
Blog at WordPress.com.