L spent the latter half of his spring break solo with dad in a cabin. Here’s something that I think is basically true (with exceptions, of course). When the fellas are hanging out with other fellas, they ingest only cured meat products, their mouths clamp shut if faced with a vegetable or a fruit, and they forgo bathing at all costs.

I suppose a mother should expect such things. I can only hope we’ve averted scurvy.

To that, soapy, warm, clean L.

The biggest gift? Most of it was done solo.

Spring break draws to a close.

L had a buddy hang out for a few days during his spring break. I had to leave early and drove his buddy home from our Spring Break casa. Hugs were exchanged by all.

L hugged his buddy and said, “I love you.”

L: “Or, you know, I think you’re great and thank you for coming.”

In the spirit of pantsing, I began tossing chunks of bread L’s way. The gulls followed and swarmed. L is simultaneously laughing and screaming, but mostly laughing.

I grew up in the Midwest. One of my parents was raised in the Deep South; the other grew up all over the place and escaped a fairly dark childhood because he is, well, he’s brilliant. College at 16. PhD at 20. Particle physicist/musician/poet/programmer/humorist. All of that probably came to be because he was so dang smart and because he absolutely, desperately needed to get away.

That said, brains aren’t equivalent to common sense. The first movie we saw in the theater was “Soylent Green.” (Yes, it’s people. For a small child, NOT GOOD.) The first movie I saw on television? “The Birds.” Yes, THOSE birds. Terrifying, squawking, ubiquitous, horrifying, not-melodious birds. To this day, a bird that’s too close is, dagnabbit, just plain scary to me. Lovely songbirds? Charming from a distance. Hummingbirds? Cute, but aren’t they a bit like killer bees?

This weekend, I set out to conquer that fear. What better place than a beach filled with seagulls and a loaf of stale bread? Seagulls are goofy, right? Pixar and Disney depict them that way. Sure, they can be a bit bossy. So can I.

Bread chunks in hand, I began my quest. Gulls are not shy. In fact they’re downright aggressive. (And, yes, of course I should know this, but we must remember the Midwestern roots.) The second they sensed “sucker with bread” they swarmed. I shrieked. They stepped back and squawked at me. With great trepidation, I held out my hand, with giant 72,000 foot long bread scrap (give or take), and they swarmed again.

I stopped my lunacy long enough to take a good look at the leader of the bird pack and what I saw looked downright human.

“Just pipe down and hand me the bread and we’ll all go on with our day.”

Did that. Lost my voice in the process. Gained a little less fear of birds. And a son who laughed so hard, he fell to the ground and said, “my mom is crazy.”

Laughter. As much and as often as possible.

L: “Is there anything more beautiful than this?” 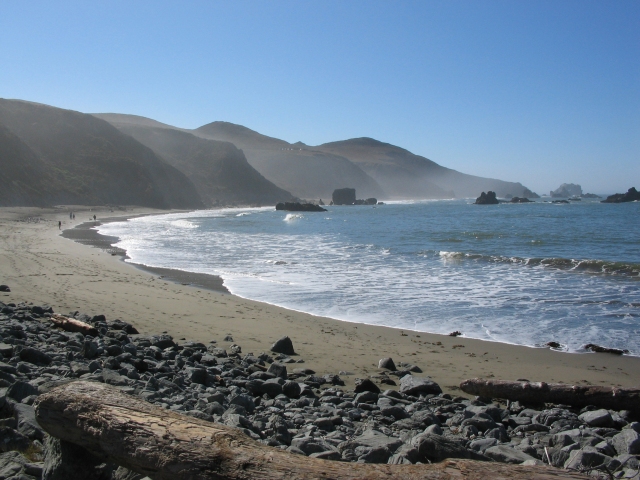